Android vs iOS: The Battle Between Aaron and Eva 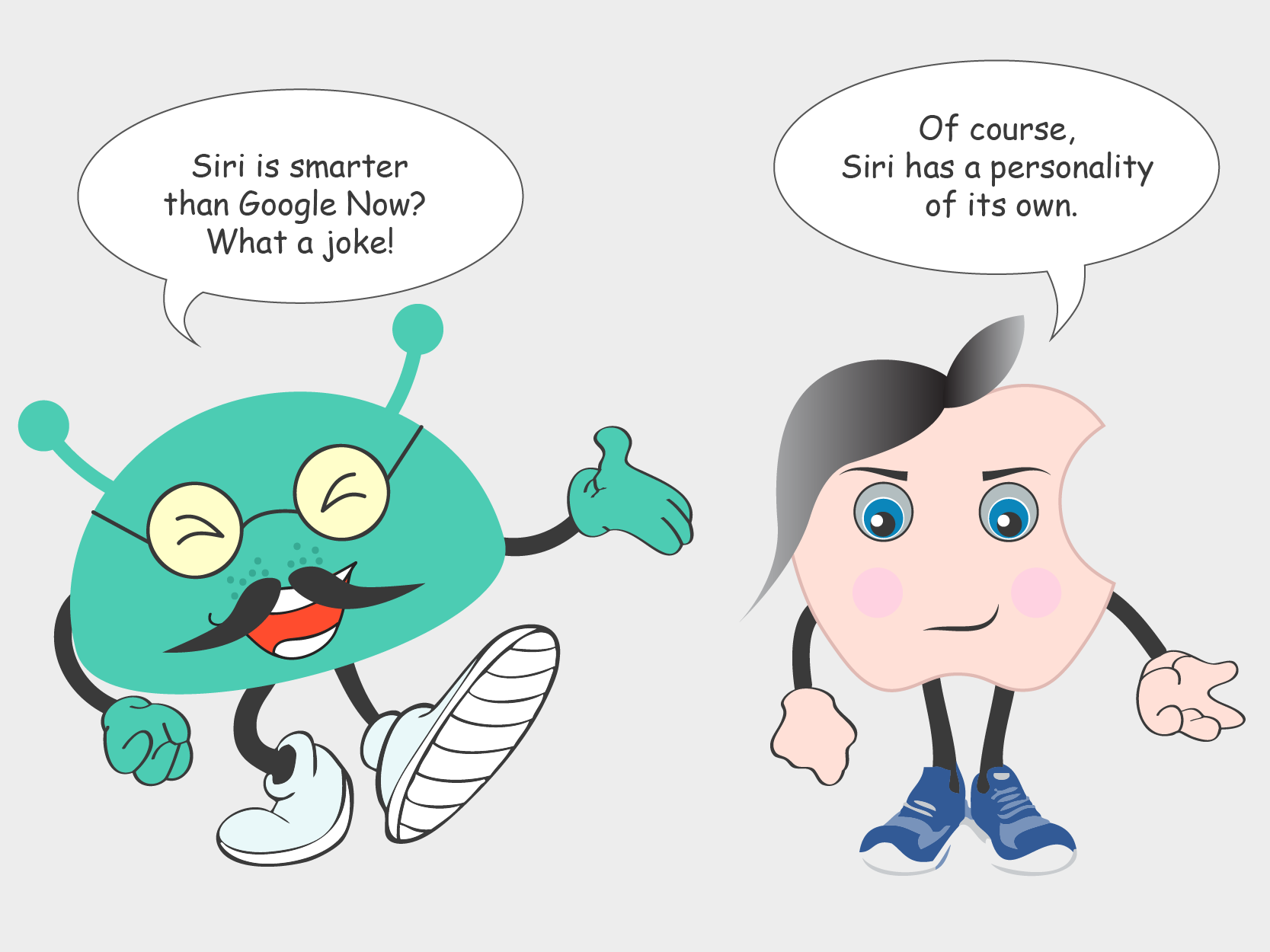 Aaron: I admit that Siri started the trend of voice assistants in 2011, but now since four years have passed, I have to say that Google Now is much more advanced. I love Google Now, and it just is there for you and works whenever you require it. Once it is setup, with one swipe from your home screen on Android, Google Now presents whole lot of useful and timely information.

Eva: Ah, after all, a virtual voice assistant was the concept of Apple and Google borrowed it from Apple. Siri debuted on the iPhone 4s, and it has its roots in the Knowledge Navigator. I agree that Google Now is good, but Siri is better since it has captured the imagination of the public and has a personality of its own. And to underscore this, let us take the case of the Apple’s app store. 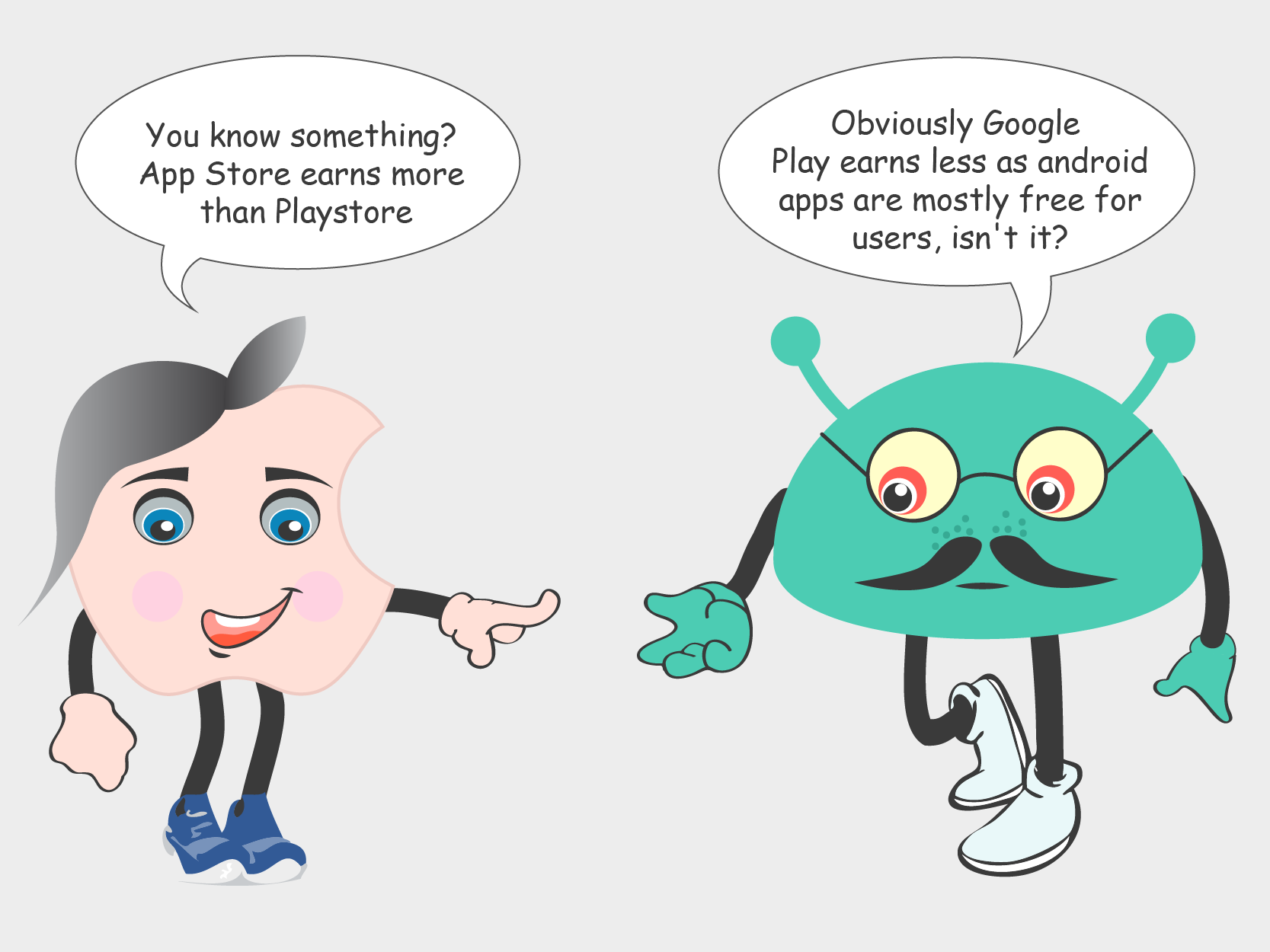 Aaron: I will answer your every question Eva. Let me give you the reasons for Google Play earning less than Apple app store. Firstly, most of the apps in Google Play are free and are ad-supported. Further to this, most people buy Android devices since they are way much more affordable and are not interested in paid apps. They just want a clean and functional smartphone that has the basic abilities.

But for others, who do use apps, there are distinct advantages that Google Play offers. Google play has clubbed apps, games, books, music, movies, TV shows, and more – into one marketplace, making this a much more seamless experience.

Eva: But Aaron, you cannot deny the fact that Apple app store does have more top quality apps than Google Play. I am not saying that there aren’t great apps on Android because there are plenty of them, but you have to admit that quality is more on the side of Apple app store. And why are you forgetting the interface of the phone since it is the most important part. Let us talk about that. 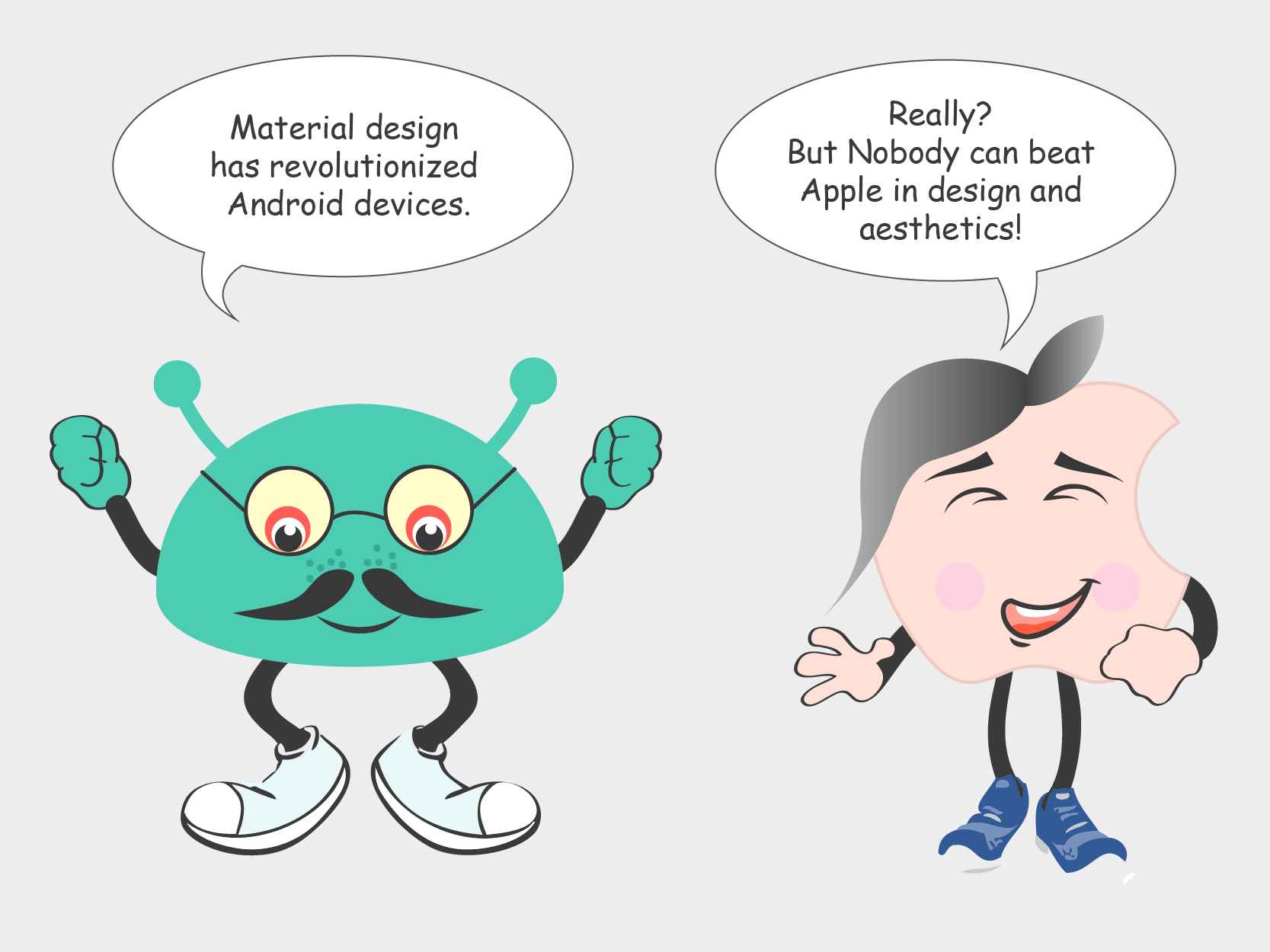 Aaron: There is no doubt that Google’s material design principals have had a profound effect on the interface of all Android devices. Eva, you must agree that android operating system lets you swap out one dialer or SMS app for another, supports home screen widgets and even lets you install alternative launchers if you want to. Flexibility is the key of the interface of Android phone. But I doubt if Apple would be able to bring such an open interface to iOS operating system.

Eva: You have to admit that Apple phones are aesthetically much more pleasing than Android devices. The sharp, flat, clean lines of iOS 8 owe a great debt to iOS 7, which brings in continuity and brings the iOS operating system into the modern age. Apple designs are distinctive and easy on the eye. You should also take into consideration that Apple’s iOS adopts the more refined aesthetic than Android. And iPhones are more secure than Android devices. 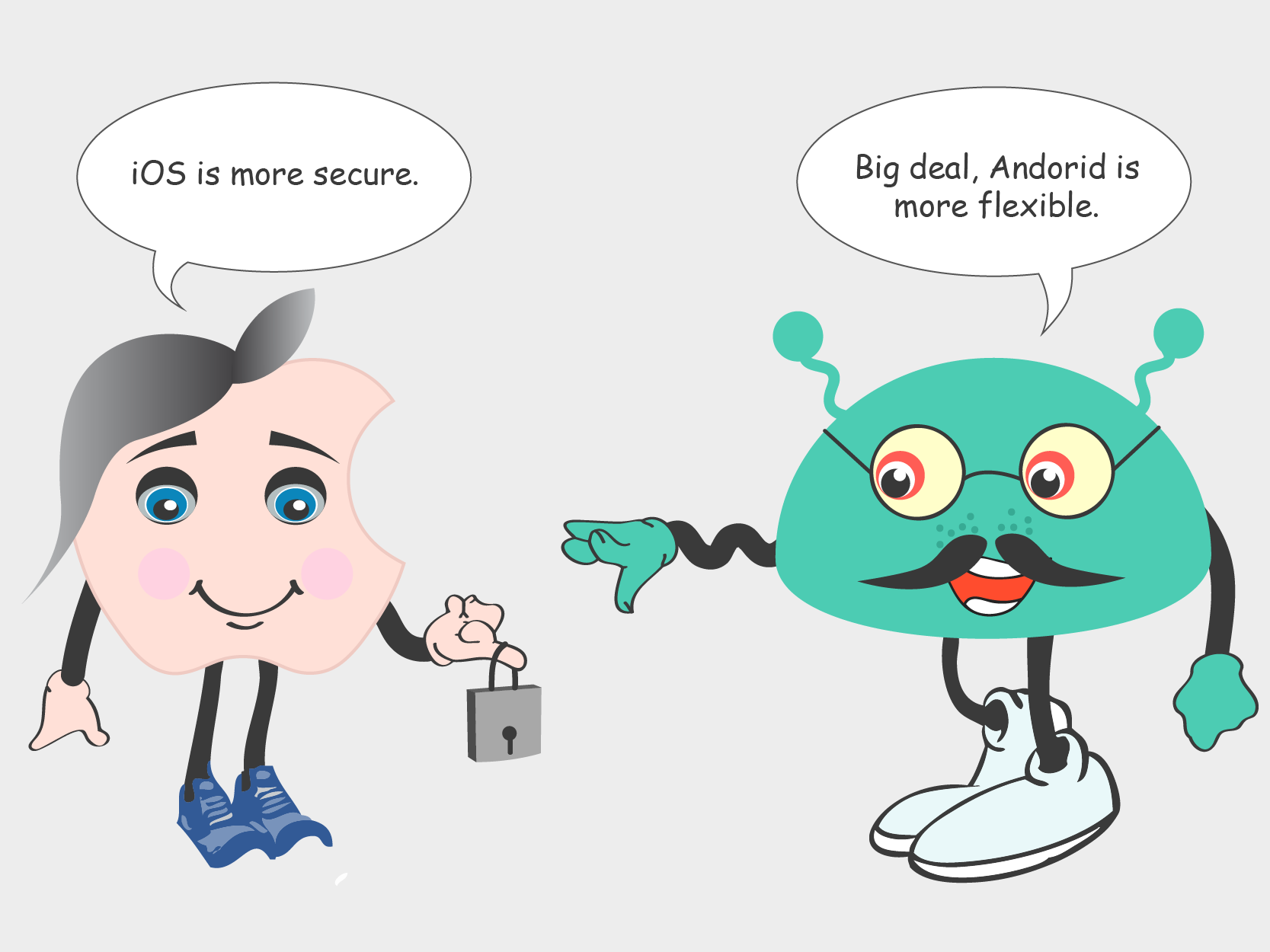 Eva: You know Aaron, Touch ID is a big win for iOS and has hugely improved the experience of unlocking a phone or verifying a purchase. The various versions of Android phones are trying to catch up, but they don’t have any success as yet. So Apple has taken the lead in this department.

Aaron: Eva, you shouldn’t underestimate the Android platform. With Android Lollipop you get the ability to trust areas and even devices so that the PIN code is automatically disabled, making the security set up more customizable and flexible. This type of flexible security operations are not found on Apple devices. As far as app security is concerned, there is no doubt that Android isn’t as locked down as iOS is, and thus it is easier to get unauthorized software on your devices. However, if you stick to the Google Play Store, the risk is minimal.

Eva: I understand that security is an issue with Android devices, just because Apple’s app store is closed and each and every app is moderated by a human, the chances of malware going online is rare and this closed system of Apple is much more secure than the open system as adopted by Android. Now let’s discuss the point of affordability of phones on which Android creates so much hype. 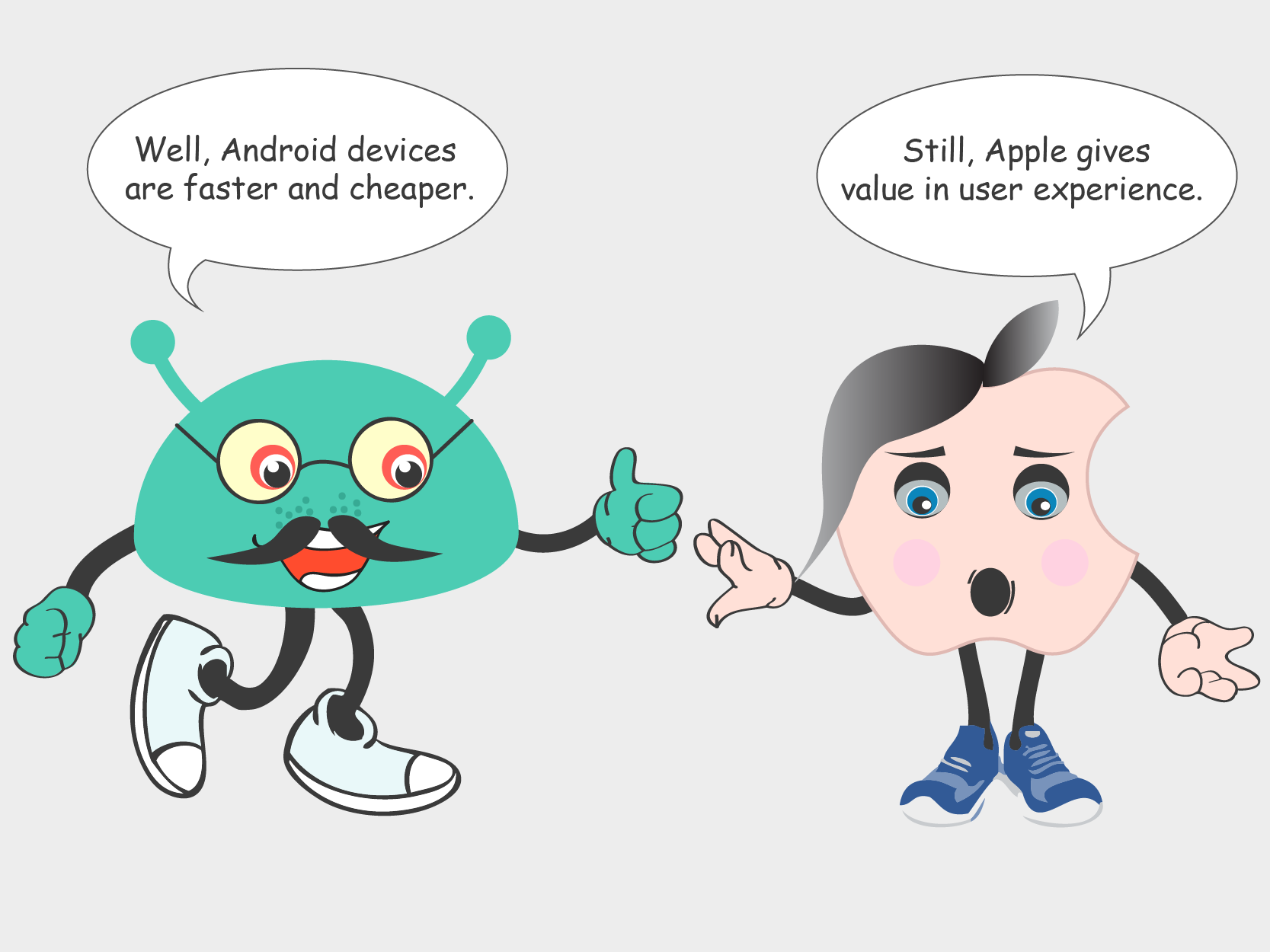 Aaron: I can bet that Apple cannot beat the price range available in the Android phones Eva. Android devices are much more diverse and cheaper than Apple phones. This is because Google run Android just provides the operating system for the phones and doesn’t force specific standards on Android phone manufacturers. Hence Eva, you are on the back foot here.

Eva: No Aaron, I am not on the back foot here. The thing is that Apple phones have a great design sense, user experience and its iPhones are much more aesthetically pleasing than Android phones. Even though they may be more expensive, but design wise and going by the general look and feel of the devices, Apple wins hands down. So Aaron, you cannot say that Android phones are always cheaper and better than Apple.

Aaron: You have to admit the fact that Android hardware has improved down the line. Newer devices run faster, offer enhanced battery life and even look pretty good. This may not include a majority of devices, that that doesn’t matter as far as price is concerned. If you choose a well-designed Android device that is comparable with Apple’s hardware efficiency, Android wins the battle as far as the price of the device and affordability of the device is concerned. Even the process of updating software is now simple in Android devices. 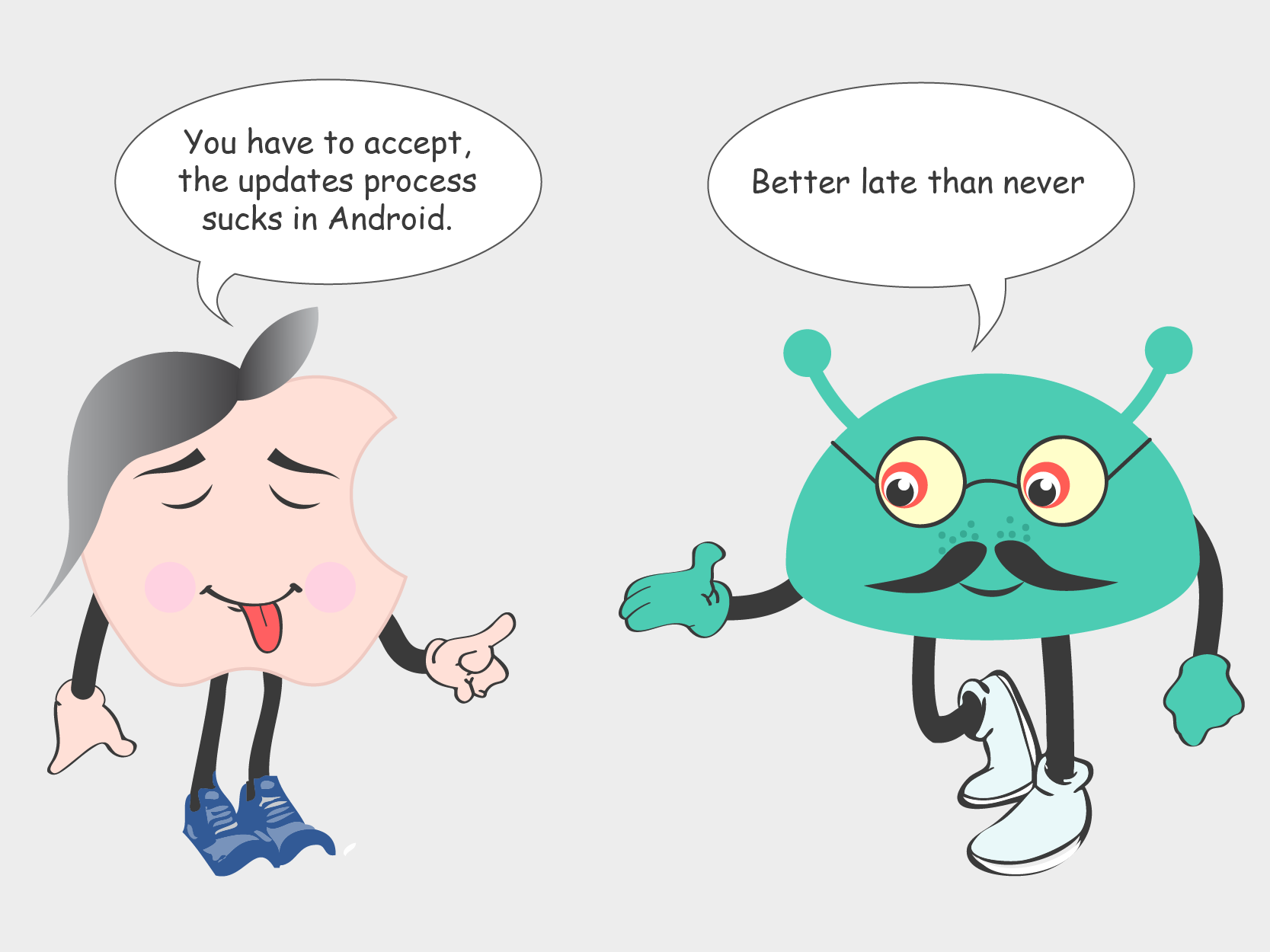 Eva: Aaron, the update process sucks in the Android devices. On the other hand, iOS upgrades are generally available to all iOS devices immediately and instantly. Users of iPhones don’t have to wait for long periods when Apple releases the upgrades for its phones but the same cannot be said about Android phones. It is usually after several months that the users of Android get their software upgraded once it has been released by Google. However, in the case of Apple, the upgrade is almost instantaneous.

Aaron: Eva, Google does upgrade Android frequently, however, since the Android is an open system, where standards are not enforced, they may not receive the updates on their phones immediately. Why don’t we talk now about the functionality of maps in which Apple was in the soup not long time ago? 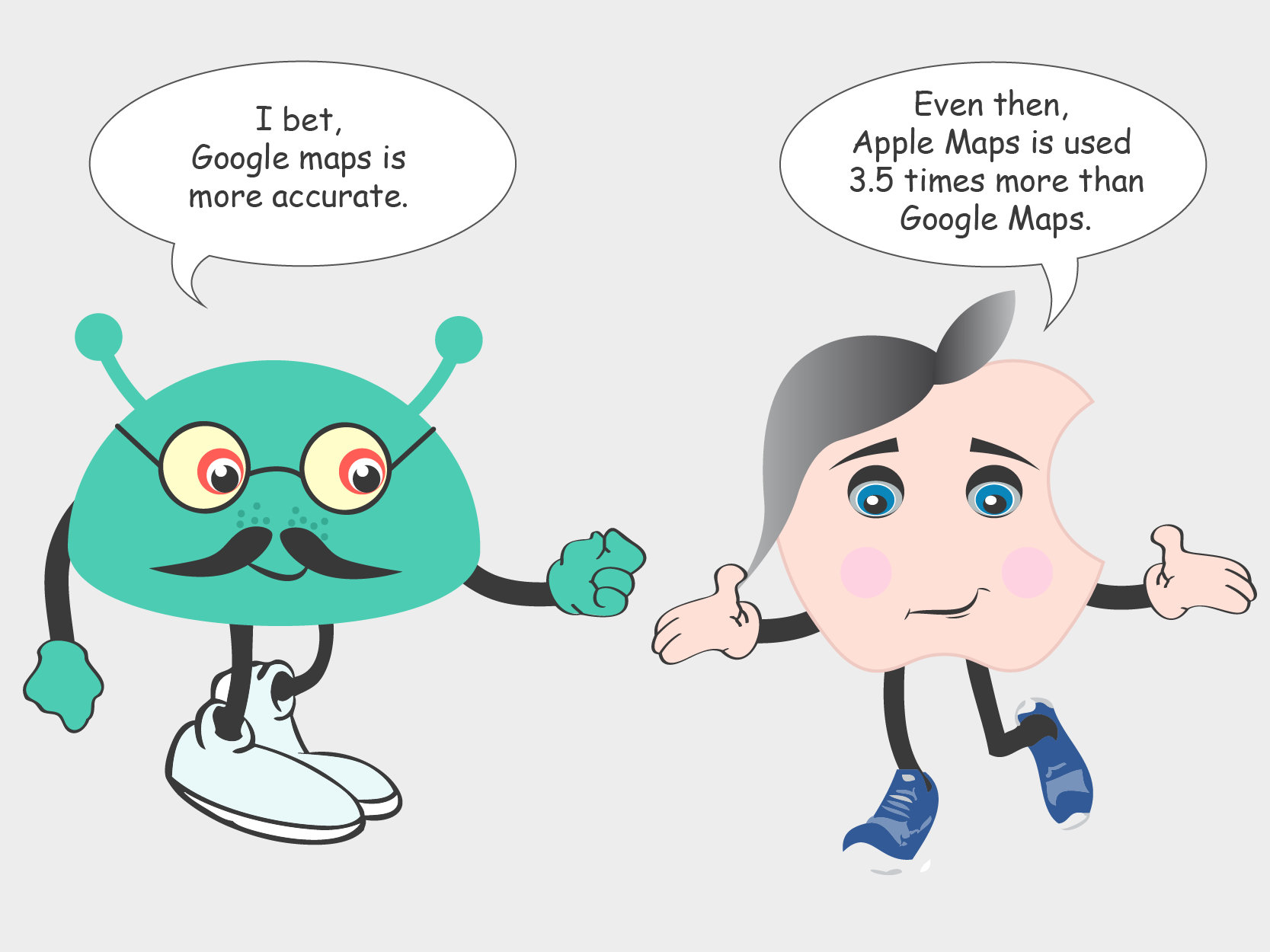 Aaron: If we take the area of maps, Google Maps, Waze and Bing are available for both iOS and Android. Google Maps is the most trusted and accurate maps service which people actually use. However, if you compare this with the mapping app of Apple, which is bundled with every iOS device, this application was widely criticized and panned when it was launched with iOS 6 due to being not so accurate. So Eva, you have to admit that Google maps is a better option for location services.

Eva: I admit that there were problems with the mapping application of Apple Aaron, but that was far too in the past and now the scene is entirely different. In fact at WWDC 2015 Apple announced that it received 5 billion requests per week for its mapping services and that Apple Maps is used 3.5 times more frequently than the Google maps. So Aaron, stop living in the past and admit that Apple maps is a far better app now as compared to Google maps. Let’s discuss some other functionalities now like photo backup. 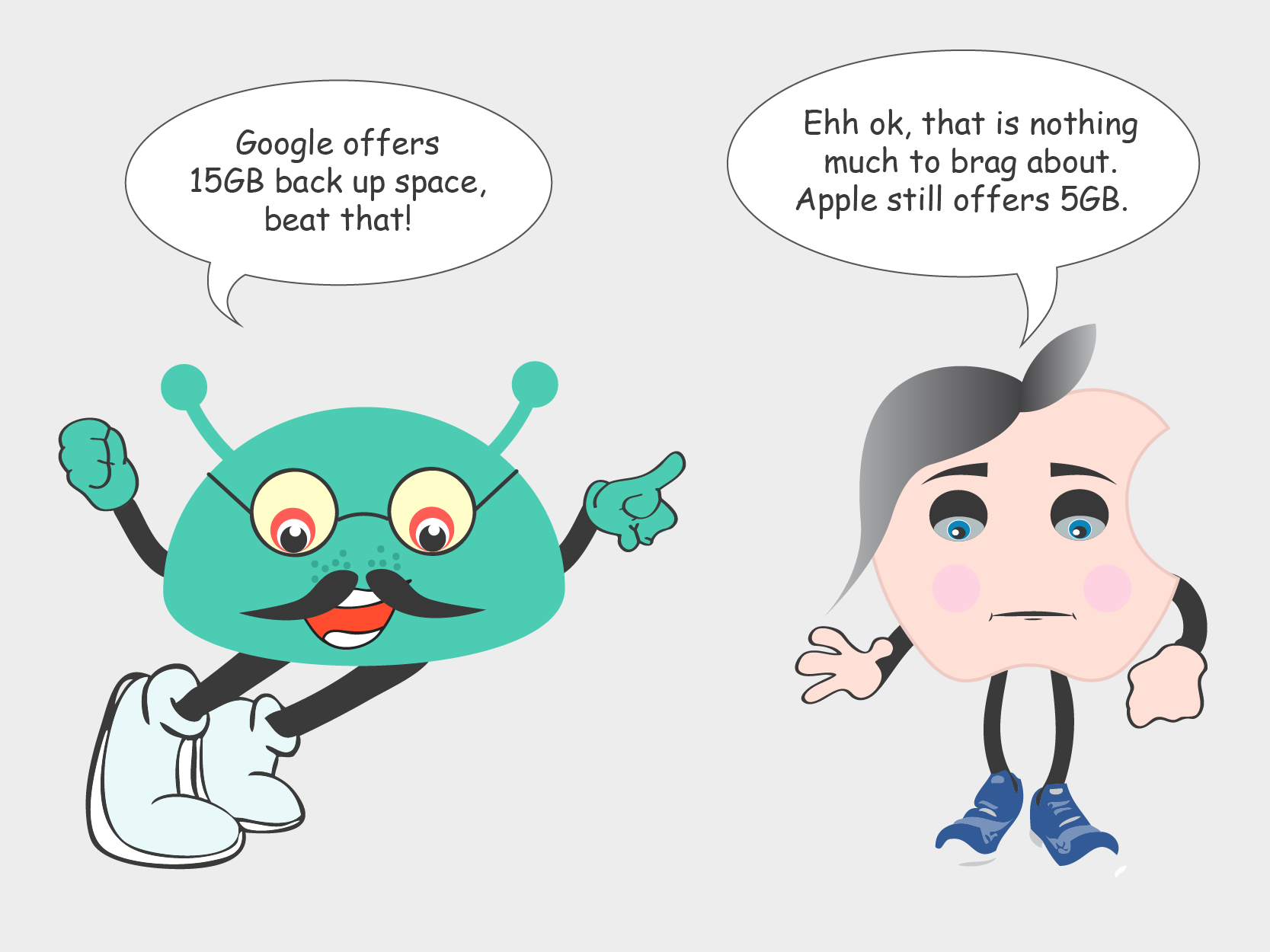 Eva: I know that iCloud only backs up photos from the last thirty days or the last 1,000 photos and doesn’t save videos, but the iOS 8 the iCloud Photo Library keeps a permanent backup, bringing it at par with Google, although it offers less free space at 5GB compared to 15GB with Google Drive and OneDrive. Now is the time to discuss customizability of the Android devices about which you are confident a lot. 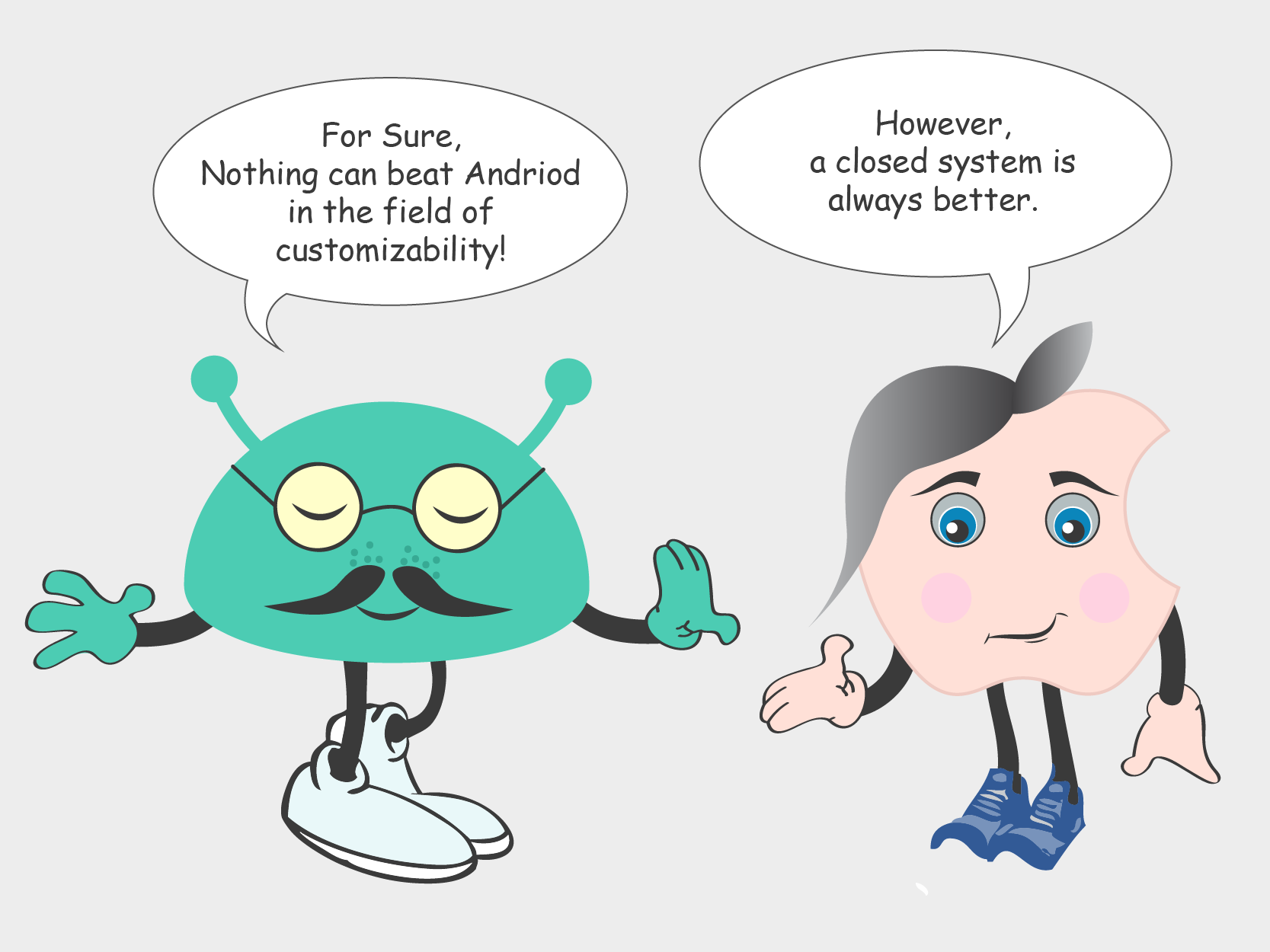 Aaron: Customizability is still one of the predominant strengths of Android. Out of the box, you can customize your Android smartphone in different ways. You can install alternative launchers that will change the look of your user interface. You can also set up your lock screen and multiple home screens with backgrounds, resizable widgets and shortcuts. All of this is not possible on iOS devices.

Eva: Apple is catching up and removing this disadvantage as well. Apple has opened up third-party keyboard support for iOS 8 which is not behind Android. However, the locked down structure of iOS provides much more secure environment than Android can offer, and this is in fact a positive sign for the Apple devices. And you shouldn’t forget the battery life. 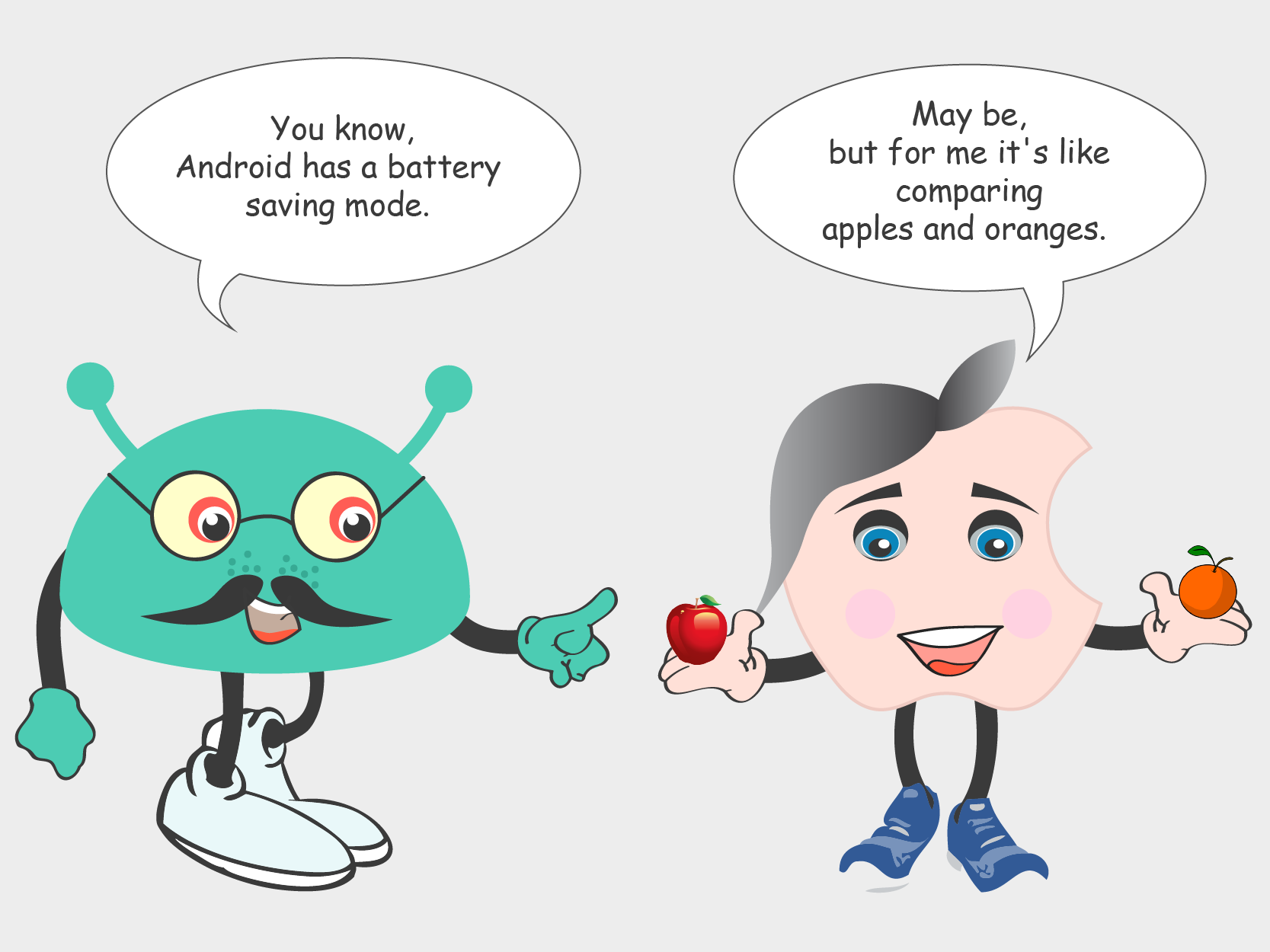 Aaron: You must accept that Apple has lost a lot of ground in the battery wars. No doubt, Apple has introduced a more detailed battery usage statistics by app in iOS 8, but it lacks a battery saving app or mode such as in Android. Users had a terrible time with battery life in iOS 7, and the bigger screens in the latest iPhones cancel out improvements made in iOS 8.

Eva: As per my thinking, it is difficult to compare the two platforms because there is no common hardware between the Android and the iOS phones. However, we can say that iOS is optimized to squeeze the most of the battery per mAh rating, so you cannot say that Apple phones have a dismal battery life as compared to Android devices. Android devices may not have much functionalities than the standard Apple devices, that’s why battery issues may come up.

What is your take on this? Jump in the debate between Aaron and Eva and help them by adding new points to this debate. However, it has to be said that at the end, both of these operating systems are great in their own right. Comparing Android with iOS is like comparing a hatchback with a SUV, both of them have made their niches. However, who doesn’t love a hot debate and we invite you to pitch in with your pros and cons between Android and iOS.